And so we were married. The laughter and happiness faded back into normalcy by the end of the day. Dad was worn out. I stayed with him again in the hospital that night, watching him sleep. Saturday turned into Sunday, and Dad had another delicious frappucino from Starbucks (I honestly find so much joy in this because Dad was never fussy. He didn’t like much coffee, but when he did, he liked it black, like Grandma and me. Having Dad request the tasty, frozen “white-girl” drinks made my heart smile, and I loved to get them for him.)

Before we knew it, Monday had come. I had to work that morning, but planned to head back to the hospital after my meetings. Dad would be discharging from the hospital to my home today, and hospice services would begin. I went home to brush my teeth, throw on scrubs, and put my hair up. That morning was much different though, because I ended up doing one more thing… [TMI warning: PERIODS] My mind was wrapped around my Dad, so I had been overlooking the important and impending cycles that my body was supposed to go through. Not that anything was regular or normal – my body hadn’t been normal for quite some time, but it wasn’t like me to go over a month without seeing any kind of anything… Monday morning, April 1st, I took a pregnancy test before leaving for work. It was supposed to put my mind at ease by showing me that I had probably been so stressed that I threw my body completely off course and I needed to get it together. Instead though… 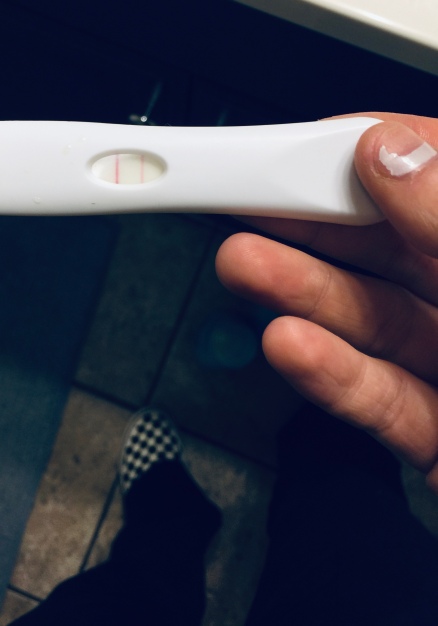 The results were not what I had expected, but I still needed to get it together. I was pregnant. Pregnant. PREGNANT!!! In the middle of all of this, the inevitable that was sure to break my heart, I was supposed to stay calm because I was carrying a baby… (To be honest, its been over 3 weeks since I found out, and I’ve even had a doctor’s appointment and heard the beating heart of the little bean, and I STILL haven’t truly wrapped my head around this) I was going to have to force myself to eat and sleep – two things I had been neglecting over the past week. How could I make time for myself when I knew the time I had with Dad was so limited?

I went to work, still in awe. I went through my necessary meetings, then headed back to the hospital to wait for Dad’s discharge paperwork to be completed. Did I tell him? Did I not tell him? I decided to tell him, because I didn’t want something to happen without him knowing that even on the other side, he would be a grandpa of not one, but two little ones. When I broke the news, I didn’t quite get the reaction from him that I would have hoped… Instead of an “oh, wow,” it was a “well…..shit.” LOL. That’s my Dad. He looked at me and said, “And here you were, supposed to be taking care of me and you went off and got pregnant.” I said, “Dad, I didn’t just get pregnant. Apparently I’ve been pregnant for at least a few weeks. I can and will absolutely still take care of you! Don’t you ever worry about that.” Then, he dozed off and so did I.

When the time had come, the EMT’s transferred Dad back onto a stretcher for transport to my house. No one knew what he was capable of, ambulation-wise, as he had been bed-bound for a week. The last time he attempted to stand was at his home in Chetopa, right before I called the ambulance. He couldn’t do it, so we figured it was probably safer with a few extra hands. I got home first, where a hospital bed, oxygen concentrator, and bedside table waited for us in what used to be my room. When Dad got there, the transition went relatively smoothly. He was glad to see Cassie, his little terrier, and glad to be in a more home-like environment.

John brought home some of Dad’s favorite snacks – Cocoa Puffs, diced pears & peaches, Jello, and instant tea. Dad wasn’t very hungry that evening, but he was growing more confused. I took the mattress off of our futon and pulled it into the room next to Dad’s bed, as that was where I would be sleeping to keep an eye on him during the night. Dad had been scared to sleep for so long, for the fear that he wouldn’t wake up. He didn’t want to die alone, and I knew it. The bright side of the situation, though, was this – though the toxins in my Daddy’s body continued to rise, they began making him increasingly tired. He was able to sleep for longer periods of time than he had in years, and that was good. He was not in any pain, just pleasant confusion, and I was good with that.

The next day, Dad’s hospice nurse came. She did an assessment on him and agreed that the doctor had been pretty accurate on Dad’s timeline. From the patients she had seen in the same condition, Dad was days or weeks away from the end. I knew it, too, because I had watched him slowly fade from the Dad I knew. I allowed my clinical mindset to take hold and pushed my emotions to the background. After all, I was supposed to stay calm and level-headed, as I was more than one body. She said she would see Dad a few times a week. She didn’t think he was quite to the “every-day” level of care yet, as he remained relatively stable.

I was a little uncomfortable about leaving Dad at home while I worked during the day. I had taken quite a bit of PTO while he was in the hospital, and I knew that with a baby on the horizon, I had to keep a steady income. I wondered about LTC placement for Dad in the facility I worked at. Then I could do my work in Dad’s room during the day, pick up Cyan after school, run home, grab some essentials, and head back to the facility. I talked to a couple of my co-workers about the idea, and they agreed that it was worth a shot. My greatest fear was coming home to find Dad already gone. At least with him staying in the facility, he would have nurses and aides present throughout the times that I couldn’t be by his side.

We filled out paperwork and decided to get the ball rolling. By this time, it was Wednesday. If all fell into place, we could potentially admit Dad by the end of the week. I felt a sense of guilt – was I doing this because I felt like I couldn’t take care of Dad? In his confusion, he said that he was okay with going to the facility, and that he wanted to get up and motoring around again soon. Motoring around? He hadn’t been out of bed in over a week. He was weak. He had hardly eaten. Even when he requested Taco Bell, he barely took two bites of his burrito supreme. The time was getting closer, and I knew it. When a body is in the phase of actively dying, it doesn’t need as many calories as it did when it was living regularly. Everything slows down, including a person’s appetite, until it just doesn’t exist anymore. Dad was almost there, but he was still drinking quite a bit of fluid. That was a good sign, I guess, because it signaled to me that it wasn’t quite time for him to go.

That evening, I was laying on the futon mattress next to Dad’s bed when I heard him cry out, “MOM! Mom! I’m trying to find you!” Grandma had been gone for 4 years. Hearing him cry out for her broke me a little, because it’s also common at end of life for people to see and hear loved ones that have already made their way beyond the veil. Dad was searching for Grandma, for guidance on which way to go.

Thank you all so much for your love and support, and for checking in on me. Still yet, there is much to be told about Dad’s story. I’m a little stronger today, I think, but Part 4 will have to wait a little longer. I love you all.

View all posts by Calyn